Evaporator is an important component together with other major components in a refrigeration system such as compressor, condenser and expansion device. The reason for refrigeration is to remove heat from air, water or other substance.

It is here that the liquid refrigerant is expanded and evaporated. It acts as a heat exchanger that transfers heat from the substance being cooled to a boiling temperature.

There are two types of evap.:
Forced Convection Type uses a fan or pump to force the liquid being cooled over the evap.

Natural Convection Type has the liquid being cooled flows naturally to the evap. due to the density differences of the chilled and warm liquid.

• Evaporators of ARTMAN Freon systems are designed for small, medium, and large industrial cold rooms, frozen storages, pre-cooling, blast freezing, and fast cooling room applications.
• ARTMAN-manufactured evaporators draw air through the coil at high efficiency. Depending on requirements and upon customer order, rotation direction of fans of the condenser can be changed by adopting specific designs.

• Casing material is AlMg3 or galvanized steel, depending on model and dimensions.
• All products are powder-coated with MX375 providing high corrosion resistance, smooth surface and decorative appearance.
• Standard side coverings provide easy access to connections.

• Drip tray can be produced as hinged or dismountable, depending on model and dimensions.
• Drip tray with insulation is optional. 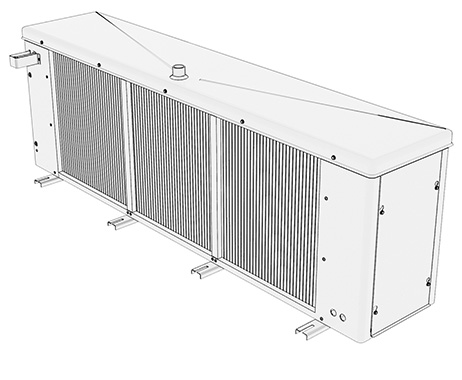 The fans used in ARTMAN evaporators not only ensure fast cooling, but also guarantee optimal air circulation distribution across the considered rooms.

In all stages of production, minimum test pressure for each coil is set at 30 bar • Highly efficient Ziehl Abegg and ARTMAN axial fans are used in 400, 450, 500, and 630 mm diameters.
• Motor protection IP44 and IP54; insulation classes B and F.
• Maximum working temperatures for mono-phase and tri-phase fans are +58℃ and +65℃, respectively.
• Special fans should be used under operating conditions above +65℃.
• Fans are arranged for standard draw through air configuration.
• 400/450 mm mono-phase fans, 230 V, 1~50 Hz.
• 400/450/500/560/710 mm fans, 400 V, 3~50Hz.
• Tri-phase fans can work at mono-speed or two-speed modes. Furthermore, EC fans provide command circuit with continuous fan speed control. This option can be installed on ARTMAN condensers upon customer’s order.
• Variable fan speed regulation can be achieved using tri-phase fans with frequency inverter and sine filter.
• Working at low ambient temperature and high air resistance, thermistors must be used for motor protection.
• Streamers providing extra air throw distance are optional.
• ARTMAN reserves the right to use fans of different manufacturers. Depending on the type, the fan data may slightly vary.